Sometimes it’s hard to imagine that cherished friends, family members, and successful business people could be suffering from this silent issue like is suicide. Even more challenging to conceive is the response that sufferers can get when they attempt to reach out for help due to the stigma of suicide. Suicide can be prevented by recognising early signs.

Support for those in immediate crisis.

Urgent help is available 24 hours a day, 7 days a week. Call 999 or 112 if you or someone else needs immediate medical attention.

If you are having thoughts of suicide or hurting yourself and need to speak to someone in confidence immediately, please contact the Samaritans on 116 123 (UK). You can also visit www.samaritans.org for more details on their services or alternatively see the list below for information about other support services that may be able to help:

Mental disorders are the most important risk factor for suicide.

According to the National Institute of Mental Health, mental disorders are the most important risk factor for suicide. More than 90% of people who die by suicide have a history of mental illness, with depression being the most common disorder reported.

It’s important to note that many people who die by suicide don’t show symptoms of a diagnosable mental disorder when they are alive. So if you think someone you know might be at risk for suicide, it’s best not to rely on their behaviour as evidence of possible suicidal thoughts or intent — even if they express suicidal ideas or make reference to feeling hopeless, helpless or trapped.

Suicidal thoughts or actions are a sign of extreme distress, not a harmless bid for attention.

Suicidal thoughts or actions are a sign of extreme distress, not a harmless bid for attention. They are never the result of personal weakness, a character flaw, or being “too sensitive.” If you are thinking about suicide, please call the Samaritans at 166 123, or get help from a friend, family member, doctor or mental health professional right away.

The National Institute on Alcohol Abuse and Alcoholism estimates that about 90 percent of people who commit suicide have some form of substance use disorder (SUD). Drug addiction is defined as a chronic brain disease, like Alzheimer’s or Parkinson’s disease. It affects not only the addict but also his or her family members as well as society at large through crime, lost productivity and other problems related to addiction.

People who believe they have an addiction need help finding treatment services so they can begin healing their physical condition while learning coping skills for managing triggers in the future without turning back toward drugs or alcohol again!

Having previously attempted suicide is the single most important risk factor for suicide in the general population.

Having previously attempted suicide is the single most important risk factor for suicide in the general population. As many as half of people who die by suicide have had a previous attempt, and this risk persists long after the first attempt. People who have previously attempted suicide are at risk of making another attempt, even after many years.

For these reasons, having made a previous attempt is one of the most important warning signs for suicide. If you have previously attempted suicide, talk with your doctor about ways to reduce your risk.

Suicide rates tend to be higher in men than women by 3x.

Men are more likely to commit suicide than women, but they’re also less likely to seek help when they’re feeling overwhelmed. Men are more likely to use violent methods of suicide as well, increasing their risk of death by suicide. This can make it harder for people around them—especially those who’ve experienced trauma or violence themselves—to recognise the warning signs and know how to help.

Women tend to have better access to mental health services than men do; this may be one reason why their suicide rate is lower than men’s (and why many other countries have seen a rise in female suicides alongside a drop among men). If you see someone you think might be considering taking their own life: don’t leave her alone; ask her what she needs from you; let her know that if she wants someone else around while she talks it out, that’s fine with you. 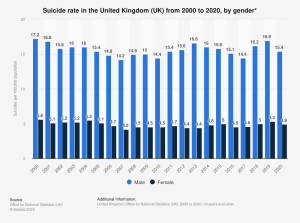 Anyone can fall victim to suicide, but certain age groups are more at risk than others. The highest rate of suicide deaths was among adults between 45 and 49 years old. This age group had the highest proportion of suicides compared with all other age groups in 2020 (15.4%). 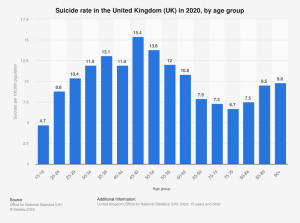 In 2016, more than half of people who died by suicide did not have a known mental health condition.

To prevent these tragedies from happening in your community, it’s important to know the warning signs and how to respond if you’re concerned about someone else. If you are worried about yourself or someone else and need help right away, call 999 or the Samaritans at 166 123.

Other characteristics include abuse of drugs or alcohol, feelings of hopelessness, impulsivity and aggression.

You may notice that your loved one:

Anyone who talks about wanting to die should be taken seriously

Talking therapies for people who are suicidal.

If you are suicidal, you will be offered a talking therapy called CBT. This is usually done in sessions of 30 minutes once a week and involves working with a therapist on the way your thoughts have affected your mood and behaviour. There are also other forms of therapy that can help if CBT doesn’t work well for you, such as IPT. Talk to your doctor or mental health professional about what would be best for you based on their assessment of your needs and preferences. If you’re offered these therapies, it’s likely that they’ll last between 6 months and 2 years until they no longer help improve how depressed or anxious you feel.

There are a number of benefits to talking therapies. They can help you understand the reasons for your distress, allowing you to see things from a different perspective and identify solutions that may never have occurred to you. Therapy can also help you find different ways of coping with problems, so as not to rely on harmful behaviours or coping mechanisms that aren’t working for you. Talking therapies also allow clients to learn how to deal with their problems and cope with stress in healthy ways instead of turning towards destructive methods like self-harm or suicide attempts.

How to find help from a therapist.

How to tell your therapist you feel suicidal.

To get the help you need, it’s important to talk to your therapist about how you’re feeling. If you’re not sure how to start a conversation on this topic, here are some strategies:

When to call a mental health professional or take someone to an emergency room.

If you or someone else is in immediate danger, call 911 or go to the nearest hospital’s emergency room.

If you are not sure what to do, call a local suicide prevention hotline or your doctor for advice.

You don’t have to be alone when you reach out for help.

When you are struggling with thoughts of suicide, it’s important to reach out for help. Don’t be afraid to ask for help from friends, family and professionals who can help you work through your feelings. Remember: You are not alone. There are people around you who care about you and will listen if you reach out.

Suicide prevention is everyone’s business. As we mentioned earlier, you don’t have to be a professional in order to help someone who is struggling. We hope this guide has given you the tools and confidence you need to be a support for those around you. If you are in a position where you feel suicidal, please don’t hesitate to reach out for help from another person or organisation such as Therapethical. You are not alone in this!

If you want to know more about your feelings, please book a free telephone consultation with one of our therapists here or click on Book Online Now.

If you or anyone around you is at imminent risk, please call 999. Samartians are also available 24/7 to provide mental health support, in case you are in distress please dial 166 123.

PrevPreviousTaylor Swift’s Eating Disorder: How she won the battle.
NextHow Psychotherapy Can HelpNext